Please excuse any false recollections, it was a long time ago and I’ve lost many brain cells between now and then. I’m happy for anyone to set the record straight or to add their perspective to the story. I’m just trying to tell it as I remember it.
It was following the release of Quadrophenia, probably towards the end of 1979, when a bunch of us (aged 14/15) started to get into the 2 tone/Mod scene. We’d all go to the Folkhouse on a Friday night with all the other kids from the area and have a dance to the 2 tone and 60’s records. By 1980, dressing like a Mod/Skinhead was the ‘in-thing’ for kids of our age. A bunch of us managed to get in to see the double bill of Quad and Scum at the ABC cinema. God knows how, because I know I didn’t look anywhere near 18. After the film, we followed the rest of the older Mods down to the 8 Bells and felt part of something.

You started to see a lot more scooters around town and a few of the older teenagers were buying Lambrettas with their hard earned pit money. I can remember Keith Riding buying a brand new light metallic blue Lambretta from the garage on Rosemary Street and bringing it up to the Folkhouse for us all to gloat over.

On a Sunday lunchtime, a lot of the local scooterists used to meet up at the Redgate on Westfield Lane. This was nice for me as I always used to hang around the Redgate as my Dad was usually there having a pint before our Sunday dinner. The scooter lads I can remember were Dave & Andy Blow, Les Cook, Big Dean, Dink, Bill Russell, Tweeky, Geoff Smith; I even think Stan the Man used to have a scoot. I remember a bunch of them starting up the Athenians down at the Redgate, and them producing the black embroidered badge. We were still at school and a bit too young for them, but they tolerated, even befriended a couple of us.

In the summer of 1980, when I was 15, my parents went on holiday and left me ‘home alone’. I respected the trust they’d placed in me and went on my first scooter rally to Skegness. Me and Chris Smith both hitched a ride in the back of the box van that the Warsop Syndicate Scooter Club (Ralph, Klinger are names I remember) took to Skeg Vegas. I remember that the van was driven by Winston Carr and he took some terrible racist abuse from some skinheads in the main car park in Skegness. So it was decided that the van and its occupants would move to Ingoldmells for safety. That meant that we didn’t see much of the main rally, but it was still enough to get me hooked.

After sitting my O levels in the summer of 1981, I was getting served in most pubs and I remember riding pillion with Dave Blow around a load of pubs on the day of Charles and Diana’s wedding. During these summer holidays I worked for Mansfield Council cutting grass and earned a load of tax free spondoolies. Stiil aged only 16, Dave Blow took me to buy my first scooter off someone on Berry Hill Road. It was a white S-reg Lambretta LI150. I wasn’t old enough to ride it until November 1981, so I had to just play with it on my back garden for 4 or 5 months.

During this time the scooterists down at the Redgate were discussing setting up a new club called the Mansfield Monsters 2nd Generation. Geoff Smith was taking the lead with the new club and they were looking to raise some cash to get some club t-shirts printed. Flush with more cash than I’d ever known, I offered to loan them the money for the printing. Me and Allen Roberts were the only youngsters that were allowed a members T-shirt. 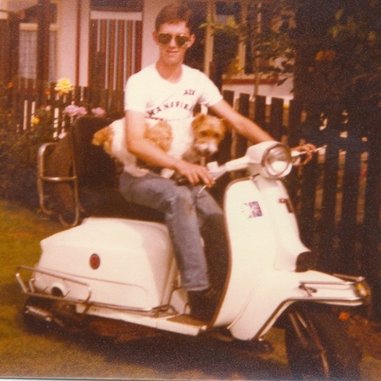 Mansfield Detours scooter club
When I went back to school in the September 1981, this is when all my other mates who were my age started to get their scooters. Al Roberts turned 17 in September and had left school after his O levels, lured by the mega bucks at the pit, so he was the first of the old QE Boys to get a Lambretta on the road. I think it was probably Daz Hunt’s idea to start our own scooter club which catered for people our age. I kind of remember having a conversation about it in the 6th form common room. Daz definitely came up with the name ‘The Detours’; he was the big fan of The Who. Either that evening, or very soon after, we got a bunch of us together on All Saints field across the road from Daz’s house and took the decision to form our own club. I can’t remember exactly who was there; I’m guessing there was me, Daz Hunt, Al Roberts, Ady Clarke, Ian Bend, Chris Hall. Mick Rigley and Jam must have been there too, as Jam was made our first Treasurer; although accounting irregularities meant that the mantel of Treasurer was soon passed over to Ian Butler. Either Al or Daz was made Secretary and I was the Chairman. I think I probably heavily influenced it being calleda Lambretta club in the first place (style over performance), but soon too many members had Vespas and we had to change to a Scooter Club. Ian Bend probably brought Mods he knew from Brunts into the fold (Kris Pash) he certainly provided us with a van driver on many occasions. None of us were old enough to drive a car, so we had to get somebody older to hire and drive the van. I think Ian’s workmate Steve Finney drove most times, but I’m sure Tony Holmes sister Tanya and hubby drove on occasion too.

Contrary to rumours, it wasn’t anything that the Monsters had done to any of us, but we were always going to be looked at as the kids in the Monsters and they weren’t interested in any other kids without scooters joining. We on the other hand were quite happy to take on members who were Mods and wanted to go on scooter runs and didn’t care whether they were not quite old enough to have a scooter yet. As long as they paid their subs, they could travel in the back of the back-up van.

As everyone got old enough, most of them got their scooters. In the early days, I volunteered to hand paint all the members badges. Unfortunately for me the membership was growing faster than I could paint patches. So sincere apologies to all who never got theirs (yes I mean you Tony Holmes). We got membership cards professionally done at Prontoprint on Clumber Street and we hired a room above Ye Olde Ramme Inn every Sunday night for club meetings. As was the trend of the day, members bought number plate letters and put MDSC on the back of their helmets. The first professionally printed patch was the monochrome ‘You Stopped Dancing’ designed by Daz Hunt. I designed the second ‘Worth Hunting For’ patch which we also had printed on T-Shirts and Sweatshirts.

In the very early days, with the help of my girlfriend’s mum, I organised a Mod disco at Armstrong Hall at Bull Farm, it had a licensed bar and we sold loads of tickets; people came from all over the district and it helped put the Detours on the map. We got loads of members pretty quickly. We got a bunch of lads from Woodhouse join (Smed, Leap, Tony Holmes, Tony Boycott spring to mind) and Tommo and Doyle came from Ravenshead and Steve, Rich and Simon all joined from Bolsover. The first run we attended as a club was Scarborough 1982. We travelled up with Derbyshire Borderline (Bucket and co.); there were loads of us on scoots and in the van.

I remember my Lambretta partially seized on the way, because I was thrashing it and I hadn’t put enough oil in the petrol. Fortunately, it released again and got me all the way there and back. It wasn’t until we got home that I discovered the massive scorch on the piston. The Detours also had big showings on the runs to Yarmouth and Colwyn Bay, Morecambe and Skegness in 1982. A select few also went to Brighton that year and that’s when the Kirkby contingent started to join the club (Jock, Nobby, Snake, Carl). The last run of 1982 I think was Skeg. My Lambretta only made it as far as Mansfield Leisure Centre, so I ended up in the van with the Kirkby lot and their fart spray.

Gt Yarmouth 1982 - On way back from Yarmouth 82  Makeshift sunshield, Open face helmets!
I can’t remember exactly when factions of the club broke off to start their own clubs, nor what the real reasons for leaving were, but the ‘Drop-outs’ left first and took their name from what the rest of us referred to them as. I think they were mainly made up from Mick and Jam and some of the Woodhouse contingent. A bunch of others left in 1983 to form the ‘Renegades’ which was made up from Chris and Rob Hall, Ian Bend, Wayne Sharpe, Tommo & Doyle, Vardy and the Bolsover lads. I’m sure they left following a vote on Chairmanship, which I retained. Rob and Chris didn’t like the way I was running things, so they organised a rebellion. It was a pity because that took a bunch of my best friends out of the club.

In my mind that was the start of the end for the Detours. I went on all the runs in 1983, as did Kris and Tony Holmes, and we had the times of our lives. Stand out memories for me, for so many different reasons were Isle of Wight, Dunbar, McDonalds in Southport and Wolfies Bar in Skegness. I thought Skegness 1983 was my last scooter rally, because that winter I bought my first car and I’m sure I couldn’t afford to run both car and scooter, but I’ve been reliably informed that we continued throughout 1984 and I was still the chairman and attended the odd rally. My alcohol consumption in 1984 was quite high, which might account for my lack of memories.
I’m told that the Detours last stand was at Great Yarmouth 1985, most of the original gang had got cars or motorbikes by then. Of those that stayed scooter boys, some went on to join the Monsters (Tony and Fletch). By this time the Monsters were probably the biggest and most influential club in Britain, but for a little while in the early 80’s their quest for global domination was spoiled by a bunch of kids (about 40 members at its height) from their own doorstep, who showed there was more than one scooter club in Mansfield; The Detours (not to be confused with that lot from Midhurst).

This only a small part of the story and I’m sure plenty of you can add a different perspective to mine. If I’ve missed you out, I’m sorry it’s difficult to give everyone a name check. If I’ve misrepresented any aspect of the story, please put me straight, it’s been a long time and memories fade. If there’s something important I’ve missed, now’s your chance to put it on record.

Many thanks to Jon for creating this website and giving me the opportunity to record my memories and relive some of the best times of my life shared with some of the best people. We all need to put pressure on Ian Butler to get all his photos digitalised and put on the site. He has some fantastic pictures of us all from this era